Viewers don’t see as much of Marc Anthony Samuel on GENERAL HOSPITAL these days, but with Felix now working as Mike’s nurse, the character is back on the canvas, and his portrayer is thrilled. “Really happy to be back,” Samuel declared during a Twitter Q&A with fans. “And working with Max Gail (Mike) has been an absolute privilege for me. He’s not only a consummate professional, to whom I’ve looked up over the years, but he’s also a really nice man.”

Samuel also hopes that his alter ego will continue to be seen on GH. “Felix has become an important component of this Port Charles community,” he mused. “His life intersects with parts inside and outside the hospital storylines.” But as far as the immediate future, the actor suggests he’ll be around “for as long as Mike needs Felix, I’m guessing.” 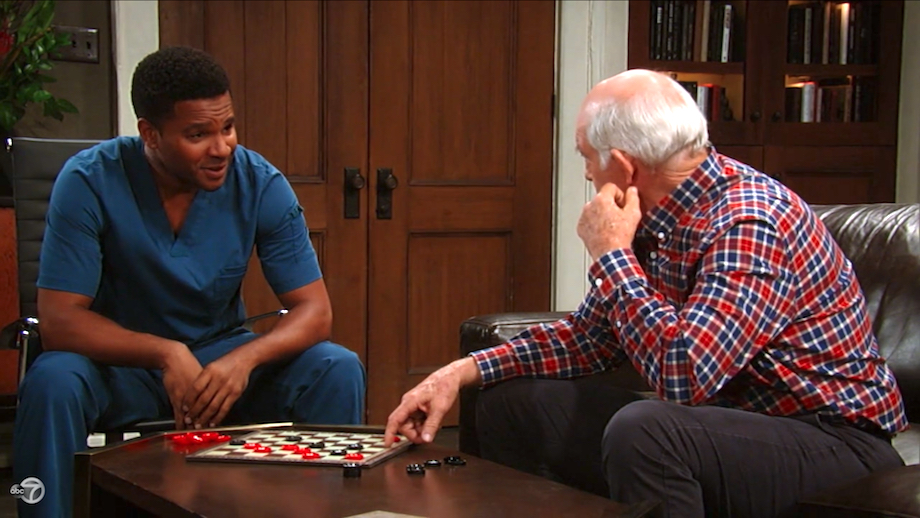 Felix is doing his best to care for Mike, but that doesn’t include letting him win at checkers! (Photo Credit: ABC)

Some soap fans have steel trap memories and often remember plot threads that the writers seem to have dropped — like the implication that Felix’s parents aren’t aware that he is gay or what happened to his younger sister, Taylor. “Would be an interesting thing to investigate,” Samuel agreed of Felix’s parents. “I would love to know where Taylor went. That could be an amazing storyline, too.”

But since GH is a soap opera, Samuel would love to see Felix enjoying a love story. The character apparently has a boyfriend, Donnie, but he’s remained off-camera. “I think that the fans of GH should get to know Felix’s love interest, Donnie, a bit more,” he declared. “Hopefully we can see that happen in the near future.”

To see what happens next to Felix, stay tuned. And for more on your favorite GH stars, keep reading the ABC edition of Soaps In Depth magazine!

What Happened to Maxie on GH?