Fans of Kirsten Storms (Maxie, GENERAL HOSPITAL) have been worried about the actress ever since the soap announced that she was taking a leave of absence from GH for personal reasons. Especially after she has previously taken breaks from the show for medical issues. And she recently opened up about her struggles with severe depression.

But now fans can mark their calendars for the week of July 24, because that is when Storms will be back on screen as Maxie! The actress has already been back on set for a while and sharing cute selfies from her dressing room and shopping for new wardrobe with the show’s costume designer Shawn Reeves and having fittings.

GH even shared a backstage photo of Storms with Ryan Paevey (Nathan) getting all the Naxie fans super-excited about the upcoming reunion of their favorite couple!

She's baaaaaack!! We could not be more thrilled to have @kirstenstorms back in Port Charles. @ryanpaevey #WelcomeBack #GH #GeneralHospital #BehindTheScenes #Naxie

Storms had been quiet on social media since mid-February, and GH announced her leave of absence on March 10, but she eventually came back with a couple of selfies and an absolutely precious photo of her and her baby girl! On April 7, she returned to Instagram looking beautiful and radiant with a selfie captioned: “What’s up? #morning”

MUST SEE: Brandon Barash and Harper Are the Cutest Father/Daughter Team Ever!

And things were clearly getting back to normal for Storms as a few weeks later she followed up with a selfie where she looked slightly perturbed, sharing: “There are few things I hate more than cleaning out my closet. Right now I can’t think of any. #springcleaning.”

There are few things I hate more than cleaning out my closet. Right now I can't think of any. #springcleaning.

MUST SEE: Vanessa Marcil Is Shopping for the Perfect Wedding Dress!

And the very next day, she shared a photo of herself at the playground with her three-year-old daughter, Harper playing on the swings! “She told me I would ‘absolutely’ fit in the infant swing,” Storms posted, adding the hashtag “#threegoingonthirteen.”

She told me I would "absolutely" fit in the infant swing. #threegoingonthirteen

MUST SEE: Bryan Craig Says a Return to GH Is “Not Impossible!”

The last time Storms posted to Instagram back in February, they were cute family photos of her and ex-husband Brandon Barash (ex-Johnny) enjoying a wonderful day out in Southern California with their daughter, Harper. The actress has always been very active on social media, sharing photos on her Instagram and posting to Twitter, so her absence was keenly felt by her fans.

On GH, Storms wasn’t seen very much following Maxie’s New Year’s Eve wedding to Nathan, and her most recent leave of absence was explained in the March 29 episode when Nathan told Dante that Maxie had left Port Charles to travel to Portland to see about a job. The cop mentioned that it was only for three months, but soon after, it was revealed Maxie wasn’t sure if she was coming back home! 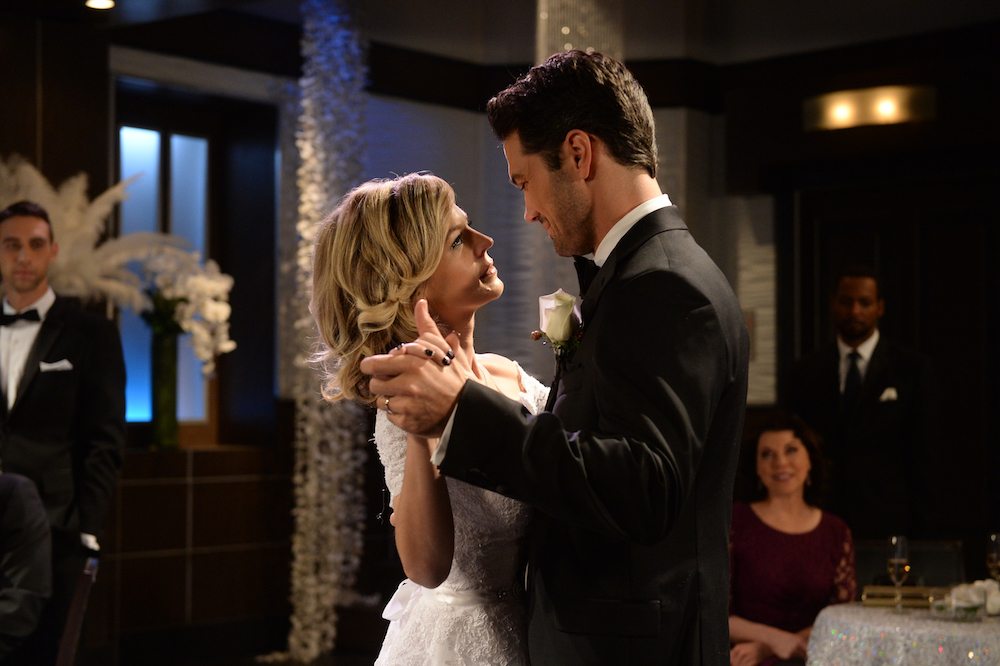 MUST SEE: Laura Wright Opens up About Her Divorce and the New Man in Her Life!

Thankfully, Storms is now back at work and will air at the end of July. Hopefully, Nathan won’t get into too much trouble with Amy before his wife comes home!

Check out Storms’ greatest Instagram selfies in our special gallery below!